Paul Ryan Does Not Call Mitt Romney "The Stench" 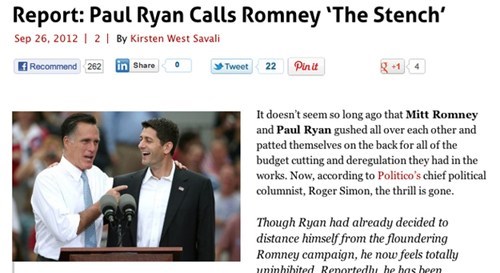 Roger Simon wrote on Politico that Paul Ryan has been avoiding Mitt Romney, and calling him "The Stench." News websites and (of course) MSNBC reported the story without doing any follow-up research, but there was one problem. It wasn't true. Roger Simon made it up.

"Some people always don't get something, but I figured describing PowerPoint as having been invented to euthanize cattle would make the satire clear. I guess people hate PowerPoint more than I thought."

Funny thing about satire, Roger. It has to be, you know, funny. Did anyone really think Paul Ryan would call Mitt Romney "The Stench?" Give the guy a little credit. Even if he were ducking Romney for some reason, I'm sure he'd come up with a better nickname than that.

46 Memes For A Break From The Madness

20 People Who Should Be Banned From Using The Internet

20 Reasons Why 'Smart Devices' Are Actually Dumb As Hell

48 Hilarious Memes To Shamelessly Giggle At